A modules can have to views: one on the back office (its options, or even a configuration screen), and one on the front office. The front office view is how and where the module is displayed within your shop's theme.

The position of a module in your theme can be changed, because you might want one module's block to be placed much higher (or lower) in the page that others. In PrestaShop's parlance, this is called "transplanting", and is done using the tool available in the "Positions" page, under the "Modules" menu. In effect, this enables you to attach a module to one of the many available hooks in the current theme, without writing any code.

The "Positions" page displays all the available hooks, and their attached modules. Many are empty by default, but some of the most useful ones have a dozen of modules (the displayHeader hook has 33 modules by default). 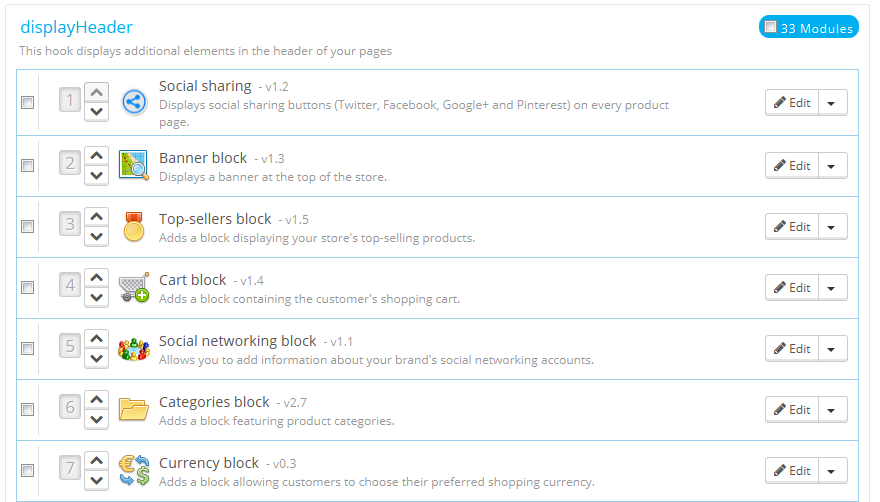 At the top of the page, a drop-down menu enables you to only display the hook in which you are interested.
By default, this page only displays the hooks on which you can position functions. Checking the "Display non-positionable hooks" box below displays all the hooks, even those where you cannot position something.

The header of the table for each hook displays the hook's name, its technical name (and for some, a quick description), and its number of attached modules. The table lists the modules that are attached to that hook.

The modules are displayed in the order in which they appear in the hook.

Moving a module within a hook

You have two ways of changing a module's position within a hook:

For most modules, transplantation can easily be done directly via the back office. Some modules require you to alter their code in order to transplant them.

Attaching a module to a hook: Transplanting

In PrestaShop, "transplanting" is the action of attaching a module to a hook. You can add a module to more than one hook.

Two things to know before transplanting a module:

Therefore, be aware that you cannot always transplant any module to any hook.

The transplanting process has its own interface:

The "Hook into" drop-down menu gives you a good idea where module can be placed.

Even though the "Hook into" drop-down list gives a comprehensive overview of the available hooks, it might not always be clear which is the one to which you want to attach your module. Do not hesitate to try another hook if the result of your selection if not what you expect.
The list gives some detail: some hook have a description after the hook's name, for instance "Add fields to the form 'attribute value'" for displayAttributeForm. Peruse them all in order to choose your hook correctly.

Each module has two icons on the right side of its row: one to edit its settings, the other to delete the module.

Editing a module's setting uses the same interface as the one used for the transplanting a module. The major difference is that you cannot change the "Module" and "Hook into" settings, as they are disabled, and thus grayed out. You can only edit the exception setting, which works just as described in the "Attaching a module to a hook" method above.
While you cannot edit the "Module" and "Hook into" settings, they can serve as a handy reminder of their current position, should you want to put them back there later on.

If you want to move a module to another hook, you must use the transplanting interface:

Always check your front-office to make sure the module is indeed where you intended it to be.

Removing a module from a hook

There are two ways to remove a module from a hook:

Another way to move modules around on the shop's homepage is the Live Edit mode, which embeds said homepage into a tool that lets you visually decide where to place your modules. You can access it from the "Position" page, by clicking the "Run Live Edit" button. 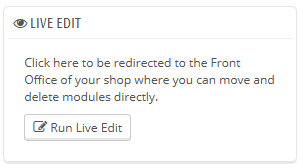 When clicked, PrestaShop opens the homepage in a new browser windows/tab, with the Live Edit script on top:

At the top of the Live Edit mode, a toolbar presents you with two buttons: "Close Live Edit" and "Save".

The first one is quite self-explanatory; the second one cancels all changes you might have made to your modules' position during this live-editing session.

Where to move modules?

Modules cannot be moved just about anywhere: it depends on both the theme's hooks, and each module's hook support (as seen in the above section). Therefore, you mostly can only move modules within their understood context: column modules can be moved within a column as well as from one column to the other (right to left, for instance), while regular homepage modules (the ones at the center) can only be moved within their specific column.

In order to give you a visual hint about where a given module can be moved, it will display an empty green block if the location is correct, and an empty red block if not.

Transplanting a module by modifying its code

Some modules cannot be transplanted into other sections of the front-office simply because they lack the necessary code.

For example, the "Quick Search" block (/blocksearch) contains templates for both column display and header display, whereas the "Currencies" block (/blockcurrencies) only has one template file which only works with the header section. Likewise, the default "Featured Products" block (/homefeatured) can only be placed in the center content section of the main page.

If you want to display simple modules such as the "Currencies" block in a position for which it was not built, you will have to edit its template files.
More complex module, such as the "Featured" block, can also be made to be displayed in other sections of the page, but they might have to be partly rewritten in order to have their design work with that new location.

To customize the transplantation ability of a module, you must give it the correct PHP function for the new target hook. For example, the "Currency" block has this function:

In order to transplant the "Currency" block into the right column, for instance, you need to add the hookRightColumn() function: